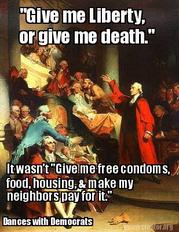 Socialists have the same mentality as a thief ...but they don't recognize this because:

B) It's "normal": They are merely doing what has been done since before they were born (they think popular opinion determines morality)

C) It's addictive: They are caught up in the greed, coveting and/or dependency that Socialism encourages and this creates a bias that makes it difficult for them to see this clearly (or else they simply don't care).

But at the end of the day they have rationalized why they don't need to respect your private property rights. They don't lose sleep taking whatever percentage of your property they feel they or someone else are entitled to.

How is that different from a thief?

Doesn't a thief also claim some moral right to your property?

WHAT ARE WE FIGHTING FOR? by (author wishes to remain anonymous)

Recently, I was listening to one of the internet patriot programs and a very disturbing trend reared its ugly head: petty, girlish, back-biting and back-stabbing amongst supposedly Christian fellow patriots.  One of the problems, as I see it, is that some people in "the movement" think that they deserve deference because of how long they have been involved, or aware "if-you-will";  If not deference, then remuneration for their long-suffering battle for the Republic.  I say "it was your choice".  Those that are just now waking up to the plight our country is in, just had a different level of discomfort than you.

To explain: the job you had may have been affected by the economy sooner than the jobs others had; you, or someone you know, may have been screwed over in our corrupt judicial system; you may be a  recently returned disabled Vet that's found out the government that sent you off to war won't live up to its promises; or, maybe, you are like myself, someone that thinks outside the box and has been ostracized for most of their lives for making waves and not being content with the status quo.  Whatever the reason, people wake up when they are capable of acting to change their circumstances. People learn at different rates; fast learners don't deserve more, and slow learners don't deserve less.  Matthew Chap 19: 27-30, are we Christians or what?

Let's say, you're not a Christian, then what?  Socialism has become an American pursuit over the last 6 decades. Every war since the Civil War has eroded the economy, The Constitution, The Bill of Rights, and specifically, the separation of powers; so much so, that most are unaware that they have become a new strange breed of paradoxical animal, namely a form of capitalist/socialist.  Our society changed because PEOPLE changed. Every war we have been involved in put us further into debt that was passed on to future generations. We used to know this: that government programs cost more than when services are left to the private sector.  But, after each war, people were more traumatized and unable to cope with reality.

with social programs to jumpstart the economy.  When government

took over entrepreneurship, the people became less innovative and

began to look towards the government to fix all their problems.

When churches stopped being charitable and ministers became

votes by giving out welfare. People became lazy.  Other people

seeing this, said "hey, why do I have to pay for them?"  So, others jumped on the bandwagon. Each time Americans looked to government to fix something that wasn't a function of government, we became more socialist.

There is no legitimate war fought off of our shores.  Our government has no business promising that we will help any allies fight a war.  The American people are not pawns to be used in any way our government wishes.  Any armed action off-shore is a war of aggression fought by mercenaries.  For a long, long time people have been enlisting into the armed services to go off and fight in non-wars for pay; they are mercenaries and the country does not owe them reparations if they get injured or when they retire.  They knew the risk when they took the job. Fighting a non-war off-shore for pay, paid for by Americans through taxes is socialist.

To say that we must pay taxes to support people that cannot or will not support themselves is socialist.

To say that everyone must buy health insurance and that it will doled out according to what the state decides is fair, is socialist.

The list is too long to enumerate, but I'm sure you get the gist of it.  We have been brainwashed and conditioned into believing that we OWE society...that's socialist!

Our founding fathers understood freedom; that's what The Constitution and The Bill of Rights is all about.

So, getting back to descension amongst the "patriots". "Judge not, lest ye be judged. "Not everyone is equally capable in all matters. What matters is that everyone does what they are capable of doing to return us to a Constitutional Republic if that is what most people REALLY want.

Recognize that the country most of us know is not the way it was supposed to be.

of government, will inevitably lead us back to the same place we are today;  a

bastard government that no one wants to takes responsibilty for creating.

A quote comes to mind that seems fitting regarding the definition of life: "Life, if

it is like anything at all, is like an avalanche; to blame the little ball of snow that

started it all, to say it is the cause, is just as true as it is meaningless."​​

​​ Repeat after me: "I signed no social contract. I don't owe shit to anyone!" 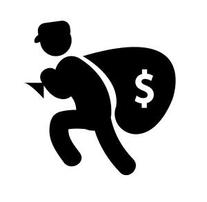