​​A while back, I penned an article about muzzle loaders.  I plan to write some more about early cartridge guns for everyone’s edification.  Lately, I have been watching the news (all the news that fits our views) on the picture radio.  I have noticed a tendency toward bias (what a surprise).  That got me to thinking about a comparison to about 150 years ago; seems that between 1861 and 1865, there were great advances made in technology along with a bias in news and text books.

​I had two great grandfathers that fought in that war wearing Union Blue, while some of their family wore gray or butternut.  The ones in blue thought the war was over slavery, the other side was thinking States Rights and limited Federal government.  That got me thinking more; having read a history book or two, the thought struck me that the importation of slaves was outlawed in 1807.  By 1861, 19 of the 34 states had outlawed slavery.  That left only 15.  The Industrial Revolution was well on its way.  The Northern States were largely industrial and small family farms.  The cities were rapidly growing around the factories and railroads.  In the South, with longer growing seasons, and very large plantations, labor intensive crops like cotton and tobacco were grown and work was nearly year round.  Industry was not growing in the South, as the cotton and tobacco could be traded for the products from the factories. The South also had small subsistence farms that were worked by families; some owned the land but many were share croppers, paying rent on someone else's land.  Many of these share croppers were former slaves that had earned their freedom.  People often overlook the fact that some Southern states raised black regiments (LA as an example had ten such regiments and some of which were slave owners themselves).

There were even blacks and Indians that owned slaves.

Charlie is a former Professor at College of Lake County Illinois.

His degrees in History and English are from Carthage College.

His expertise is in early American History. 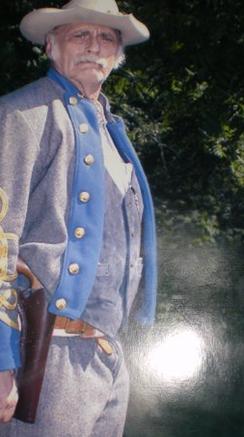 ​​​What was happening was that both parts of the country developed into a two class system, people that labored and those that owned the factories, businesses or plantations.  Massive immigration came in through the big northern cities or the new cities developing on the west coast.  Labor was cheap and plentiful.  (Any of you hear of folks wanting cheap plentiful labor now?  If I was teaching a class now, I would ask you to tell me what your thoughts are considering these facts.  Jobs go where the labor and energy are cheap.  That increases profits.)  Meanwhile, these factories started producing machines that could replace unskilled labor. The Cotton Gin is one example.  It removed the seeds and combed out the cotton that previously had been done by hand. Chopping cotton and tobacco could also be done by machines.  Assembly lines, power machinery and interchangeable parts allowed massive production.  In the North a factory could lay off employees when sales slowed or a machine took over. Where slaves were used, they needed to be fed and housed (basically maintained like a machine) all year regardless of whether or not there was any work.

Slavery was going away, except for very huge Deep South Plantations.  People do not like change; they wanted to do things the way they had always been done.  The small farmers in both the North and South pretty much took care of themselves.  City folk in the north needed others to provide their food.  Many were immigrants that were used to strong Central Governments where they came from.  They did not connect very much with the state.  In the South they often felt themselves citizens of the state.  They had often been in that state for several generations.  The South often sold their products to London by contract, and the North had to buy things like cotton from England. Some of those factories were producing ready to wear clothing.  What was happening was that special interest groups were working against each other.  The need for slavery was being reduced, but some had a lot of money tied up in it.  Industry was growing, but mostly in the North.

Different attitudes and beliefs separated the nation.  The South with its’ lower population density could not out vote the more populous North.  Sooner or later things had to be settled, but some were in a hurry.  The North pushed for laws from the federal government that would apply to all states.  The South screamed States Rights.  The North preached Equality for all.  Meanwhile, in the South where land equaled wealth, the oldest son got the land and the younger ones often became military officers. In the North where wealth was industry or business, the whole family often worked in the business.   A perfect storm was brewing.  When the South decided it needed arms, the North fired on Ft. Sumter. The South had fine officers and NCOs that were dedicated to their states.  The North had industry and a seemingly never-ending supply of manpower.  (One might recall that WW1 and WW2 were carried by the United States with manpower and industry.)  Without outside aid, the South was in a bad position.

At the start of the war the nation had forty warships; soon the North had four hundred and blockaded the South.  The Die was cast.   (We again have states discussing succession from the Union and a “Concon”; strange how history can come back to punish us for not understanding it.  Sadly, we seem to have lost acceptance and understanding of the 9th and 10th Articles to the Bill of Rights.)   Most people may not know but consider this: often the life of laborers in the North was far worse than many of the slaves in the South.  Indeed the sweat houses, factories, and company stores (where labor was required to live and shop) were often leaving the workers in debt; this, in part, lead to the start of unions.  Sadly, young women were only considered useful to satisfy the sexual desires of those waiting in line; brothels were commonplace.  Child labor was common also.  If we jumped into a time machine and went back to ask these people about these things, they might not have noticed that they lived in the Land of the Free.  This period also saw the start of the draft and income tax, although those forms of indentured servitude were later canceled and then reinitiated for WW1.  Many immigrants to the North ended up in the Army of the North before leaving the dock not really knowing what they were fighting for.​​​​​