next
Das Kapital by Karl Marx
(an economic model) 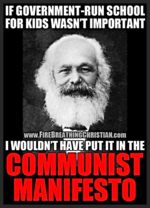 1. Abolition of private property in land and application of all rents of land to public purpose.
The courts have interpreted the 14th Amendment of the U.S. Constitution (1868) to give the government far more "eminent domain" power than was originally intended, Under the rubric of "eminent domain" and various zoning regulations, land use regulations by the Bureau of Land Management property taxes, and "environmental" excuses, private property rights have become very diluted and private property in landis, vehicles, and other forms are seized almost every day in this country under the "forfeiture" provisions of the RICO statutes and the so-called War on Drugs.

2. A heavy progressive or graduated income tax.
The 16th Amendment of the U.S. Constitution, 1913 (which some scholars maintain was never properly ratified), and various State income taxes, established this major Marxist coup in the United States many decades ago. These taxes continue to drain the lifeblood out of the American economy and greatly reduce the accumulation of desperately needed capital for future growth, business starts, job creation, and salary increases.

3. Abolition of all rights of inheritance.

Another Marxian attack on private property rights is in the form of Federal & State estate taxes and other inheritance taxes, which have abolished or at least greatly diluted the right of private property owners to determine the disposition and distribution of their estates upon their death. Instead, government bureaucrats get their greedy hands involved.

4. Confiscation of the property of all emigrants and rebels.
We call it government seizures, tax liens, "forfeiture" Public "law" 99-570 (1986); Executive order 11490, sections 1205, 2002 which gives private land to the Department of Urban Development; the imprisonment of "terrorists" and those who speak out or write against the "government" (1997 Crime/Terrorist Bill); or the IRS confiscation of property without due process.

5. Centralization of credit in the hands of the state, by means of a national bank with state capital and an exclusive monopoly.
The Federal Reserve System, created by the Federal Reserve Act of Congress in 1913, is indeed such a "national bank" and it politically manipulates interest rates and holds a monopoly on legal counterfeiting in the United States. This is exactly what Marx had in mind and completely fulfills this plank, another major socialist objective. Yet, most Americans naively believe the U.S. of A. is far from a Marxist or socialist nation.

6. Centralization of the means of communication and transportation in the hands of the state.
In the U.S., communication and transportation are controlled and regulated by the Federal Communications Commission (FCC) established by the Communications Act of 1934 and the Department of Transportation and the Interstate Commerce Commission (established by Congress in 1887), and the Federal Aviation Administration as well as Executive orders 11490, 10999 -- not to mention various state bureaucracies and regulations. There is also the federal postal monopoly, AMTRAK and CONRAIL -- outright socialist (government-owned) enterprises. Instead of free-market private enterprise in these important industries, these fields in America are semi-centralized through the government's regulatory-industrial complex.

7. Extension of factories and instruments of production owned by the state; the bringing into cultivation of waste lands, and the improvement of the soil generally in accordance with a common plan.

While the U.S. does not have vast "collective farms" (which failed so miserably in the Soviet Union), we nevertheless do have a significant degree of government involvement in agriculture in the form of price support subsidies and acreage allotments and land-use controls. The Desert Entry Act and The Department of Agriculture. As well as the Department of Commerce and Labor, Department of Interior, the Environmental Protection Agency, Bureau of Land Management, Bureau of Reclamation, Bureau of Mines, National Park Service, and the IRS control of business through corporate regulations.

8. Equal obligation of all to work. Establishment of Industrial armies, especially for agriculture.
We call it the Social Security Administration and The Department of Labor. The National debt and inflation caused by the communal bank has caused the need for a two "income" family. Woman in the workplace since the 1920's, the 19th amendment of the U.S. Constitution, the Civil Rights Act of 1964, assorted Socialist Unions, affirmative action, the Federal Public Works Program and of course Executive order 11000. And I almost forgot...The Equal Rights Amendment means that women should do all work that men do including the military and since passage it would make women subject to the draft.

9. Combination of agriculture with manufacturing industries; gradual abolition of the distinction between town and country by a more equable distribution of the population over the country.
We call it the Planning Reorganization Act of 1949 , zoning (Title 17 1910-1990) and Super Corporate Farms, as well as Executive orders 11647, 11731 (ten regions) and Public "law" 89-136.

10. Free education for all children in government schools. Abolition of children's factory labor in its present form. Combination of education with industrial production, etc. etc.
People are being taxed to support what we call 'public' schools, which train the young to work for the communal debt system. We also call it the Department of Education, the NEA and Outcome Based "Education".

So, is the U.S. a "free country" today? Hardly! Not compared to what it once was. Yet, very few Americans today challenge these Marxist institutions, and there are virtually no politicians calling for their repeal or even gradual phase-out. While the United States of America may still have more freedoms than most other countries, we have nonetheless lost many crucial liberties and have accepted the major socialist attacks on freedom and private property as normal parts of our way of life. The nation, whose founders included such individualists as Thomas Jefferson, George Mason, James Madison, John Adams and Patrick Henry, has gradually turned away from the principles of individual rights, limited constitutional government, private property, and free markets and instead we increasingly have embraced the failed ideas and nostrums of socialism and fascism. We should hang our heads in shame for having allowed this to happen.

But, it is not too late to reverse these pernicious burdens and instead enact pro-freedom reforms to put our nation back on track again. It can be done.

In some ways the Left has a head start over us on the pro-freedom Right. The enemies of American freedom do admittedly dominate the entertainment industry, television news media, and academia -- but we have the tremendous strategic advantage that reality (including man's nature) is on our side; so, unlike the socialists and "liberals" (welfare-state fascists), we are not in the position of having to advocate a system which constantly tries to "make water to go uphill" -- or force human beings into a rigid Utopian straight-jacket based on the whims of some clique of central planning bureaucrats. We know that individual freedom for peaceful people within a constitutional republic works in practice; our country's history demonstrates that. The piecemeal abandonment of those principles and institutions which once made America great has proved to be a a dead-end road to failure. That is why I tend to be a long-term optimist even though things often look pretty glum in the meantime. Just as Prohibition was eventually repealed, I feel encouraged that such key statist achievements as the income tax, government schools, fiat money/central banking (the Federal Reserve), "environmentalist" regulations, property forfeiture laws, and other Marxist planks and leftist institutions can be rolled back and repealed altogether, although it may take several decades.

Those who would carry forward the ideas and principles of self-ownership, private property, free markets, laissez faire, the rule of law, and constitutionalism which informed America's founders must become more active on the key ideological battle fronts. We need more influence not just in politics, but in areas of entertainment, academia, journalism, think tanks, churches (we need our own individualist Walter Rauschenbushes), literature, art, and other venues of expression and activism.

Marxism and socialism have proved to be colossal failures all over the world. As Frederic Bastiat wrote in his classic The Law just prior to his death, "let us now try liberty!"​​

Although Marx advocated the use of any means, especially including violent revolution, to bring about socialist dictatorship, he suggested ten political goals for developed countries such as the United States. How far has the United States -- traditionally the bastion of freedom, free markets, and private property -- gone down the Marxist road to fulfill these socialist aims? You be the judge. The following are Marx's ten planks from his Communist Manifesto.

KEYNES at HARVARD
Economic Deception as a Political Credo
Did Christians Destroy Classical Culture and Create the Dark Ages?
View on Mobile