​Soon millions of people around the world who profess to be "Christians" will celebrate a holiday they refer to as Easter.  Yet most, if not almost all of these people do not know the origins of the word "Easter" or how it came to be celebrated when it is.  Let us first look at the word "Easter". 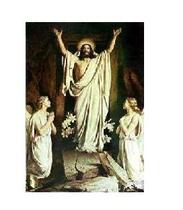 The word Easter is not found in God's Word.  The word Easter is a Roman/English bastardization/translation of the word Ishtar.  Ishtar was the name for an ancient Babylonian Spring fertility festival which the Roman's adopted.  It was held coincidentally with the Spring Equinox.  Some of the things that were worshiped during this festival were eggs and rabbits.  Eggs and rabbits have been symbols of fertility among many pagan religions for milennia.

Saul of Tarsus, who became the Apostle Paul, founded the church in Rome among other churches during his travels throughout the Roman Empire.  Saul/Paul was a Roman citizen.  His father was a Roman, his mother was Jewish.  Not long after Paul founded the Church of Rome, those people who made up that church started to incorporate many of their pagan Roman customs into their church worship services.  When Paul found out about this, he cautioned them not to do this in one of his letters to that church.  I believe that this was the real reason why Paul was arrested and eventually beheaded when he returned to Rome because that church had already made inroads with the Roman government and the church hierarchy did not like Paul telling them they could not incorporate their pagan celebrations into their services.  Paul was beheaded because it was against Roman law to crucify a Roman citizen.  How convenient this was for the Roman Church because I believe they did not want Paul to be "martyrized" and equated with the Lord.

By 300 A.D. all churches that Paul and the other Apostles had started were either gone or had come under the control of the church in Rome.  In 325 A.D. the church in Rome convened the first council of Nicaea to address several issues, one of which was to establish a date for "Easter".  While a specific date was not established, it was decided that Easter should coincide with the Spring Equinox just like Ishtar.  This is still the custom today.

Now, for one of my favorite topics, the truth: Jesus and His disciples were gathered in the "upper room" for the feast of Passover because Jesus was of the House of Judah as were most of His disciples. Traditionally, Passover was observed 14 days after the beginning of the Jewish New Year.  The start of the Jewish calendar year coincided with the first new moon after the Spring Equinox every year.  This was established when the Nation of Israel came out of Egypt.  Obviously the date according to the calendar that we use today would be different every year for the start of the Jewish calendar.  Later that evening, after Jesus and His disciples had concluded their Passover observance, Jesus was arrested by the Romans.  The Romans were a sadistic lot.  They thoroughly enjoyed making people suffer.  According to God's Word, Jesus was repeatedly flogged and tortured.  Furthermore, He was brought before Pontius Pilate three times before Pilate finally "washed his hands" of the whole situation.  To think that all of this transpired within 24 hours is so totally ridiculous that it perfectly illustrates the attitude of the church regarding the intelligence of the masses.  In all likelihood, Jesus' suffering and crucifixion transpired over the course of days and probably even weeks.  My point here is that it is impossible to determine the exact date according to our calendar, or any other calendar for that matter, of Jesus' crucifixion.

The information in the previous paragraph is in addition to the fact that the calendar that we use in the U..S. of A. has only been in use since 1539 A.D. and was subsequently modified and adopted by English speaking countries in 1753 A.D.  Calendars in general may be a topic for another article.

The bottom line and the reason for this article is this: by using the word "Easter" and perpetuating the custom of using eggs and rabbits to symbolize this time equates the wondrous gift of Jesus' to the world with pagan customs which is an abomination to the Lord.  We should celebrate Jesus' wondrous gift every single day and not relegate it to one day of the year, or a weekend, and not equate His gift with pagan abominations.  (F.Y.I.: the word "abomination" is defined as something that is totally loathsome and disgusting to the Lord.) His life is truly the only One worthy of emulating.  And, if you want to celebrate Jesus' crucifixion and resurrection, do so on the traditional day of Passover, which is the fourteenth day after the first new moon after the Spring Equinox.  This year that day is 13 April.  After all, Jesus is our Passover Lamb.

While many Christians are quick to find fault with those who use colorful language and other behaviours traditionally denounced as sinful, those same Christians not only do not celebrate these events when they actually took place, but also have no compunction about attaching a name for a pagan holiday to it, and perpetuating pagan customs to out Lord's gift.

Why on earth would you want to piss-off God to that extent?​​​