I bought 4 drapery tiebacks online a while back. Since nothing in our house is built according to normal, substandard specifications, the screws weren't long enough to catch the wood under the wallboard. What was needed was special machining of a part.

Thankfully, Tim knows how to do just about anything. Here's a picture of what he did to fix the problem. How he did it is something only he can explain. One of his favorite sayings:

"there are no problems, only solutions."

If you are in a serious relationship, and you are a man, eventually you will encounter

Naturally, because you love your significant other,  you try to fulfill the request as best as possible. Far more often than not, Murphy’s Law kicks into play.  Such it was recently for me.

My wife had ordered some drapery gizmos.  These gizmos are designed to be fastened to the wall,  next to the window opening on the inside, to facilitate tying the draperies out of the way when the window is open.  These particular little “oh-so-pretty” doodads came with “hanger-bolts”.  A hanger-bolt is a headless screw that has a machine thread on one end and a wood screw-thread on the other.  The machine thread threads into the base of the gizmo and the wood screw end is intended to be screwed into the wall.  The problem was the wood-screw end was not long enough for our purposes.  Normally, the wood-screw could be screwed into the wood window casing which is typically how a window is trimmed out on the inside of a house. My windows do not have wood casings;  the openings are drywall-wrapped.  To compound the dilemma, not only is my drywall 5/8” thick but under that is a ½” layer of rigid foam insulation; making a total of 1 1/8” of material to go through before reaching some solid wood to mount the gizmos to.

I bought some  ¼”  x 2 ½”  lag-screws;  those lag-screws have about 2” of wood screw thread and the last  ½”  portion before the head was unthreaded.   First,  I cut a piece of  1”  wood dowel -  3” long.  To insure the ends of the dowel were square,  I cut it in my miter saw and then mounted it in my lathe chuck.  I center-drilled a  3/16”  hole in the end of the dowel. This was to hold the lag-screw in the lathe to work on them (4 required) without damaging the wood screw threads.  With the lag-screws screwed into the dowel, I cut the head off;  then,  the remaining portion had to be turned down  .020”  to be able to thread the  6mm x 1.00  thread; this was the reason for doing this little project on the lathe.   I did the threading with a die.

Viola!  Long enough hanger-bolts with the correct metric thread to thread into the gizmo and another honey-do dilemma solved.

So, if you want your significant other to think you are sexy, fix stuff.​ 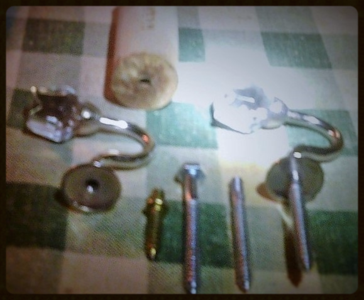