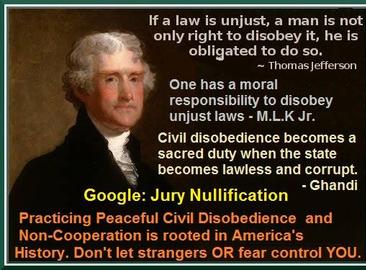 ​​Republic or Democracy  by Tim Siewert

I have always been a patriotic Eagle Scout, Marine (once & always), etc.  I have been following the “patriot” movement for nye unto thirty years now, always on the fringe, just trying to live my life as God would have me do.  I've just been following, being aware, because I am no longer a joiner, and because I had hoped that things in our country would straighten out.  It appears as though this is not going to happen.  Unfortunately, the insouciant, squid-brained general population of this country refuses to comprehend the gravity of the situation.  As long as they have ball-worship, circular car worship, and realty TV hokum on the Mesmer-box, and six-packs in the fridge, everything is good to go.  These past times I view as the masses religion,  the panacea promoted by the ubiquitous “they” and their presstitute media to keep the population lulled into a state of complacency.

Another huge part of the problem, as I see it, is due to the fact that the insouciant general population does not understand what importance of the meaning of words.  Take for instance the words “patriot” & “patriotic”.  Lately there has been a significant stigma attached to these words.  A patriot is defined as a person who loves, supports, and defends his country & its interests with devotion.  Notice the definition says a person’s country not the country’s government.  Being patriotic is defined as merely exhibiting the characteristics of a patriot.  The powers that be, the ubiquitous “they”, would have everyone believe that being a patriot or patriotic is bad, yet they still want everyone to be supportive of their policies.  This sounds to me like “double-speak” that is intended to confuse the meaning of words and to cloud the issues.

This pattern is nothing new, it happens all the time in groups.  Usually when the leaders of the group want to further their own agenda and do not want the group to be totally aware of what is going on.  Groups want joiners not soloists.  Groups want all members of said group to be of the same mind-set.  This is known as “group-think”.

When I rode with a club in FL, when I lived there in the 80s, I never joined the club I just rode along for the fun and camaraderie, & the parties.  I learned that I am not a “joiner” but a soloist.  Yes, I did join the Boy Scouts, the NRA, and the Marines prior to my time in FL; and all those experiences changed me.  All of those experiences taught me about “group think”.

“Group Think” is a philosophy, a “mind-set”, that occurs whenever two or more people come together with common interests.  Inevitably one or more of the group will be subjugated by the group.  The subjugated one or ones will be forced to adhere to the group philosophy or be forced to leave the group.  Another thing that occurs is that there will be an “Alpha”.  Notice that I did not attach “male” to “Alpha”.  This is because sometimes the “Alpha” can be a female.  Many times this happens in families.  A weak male will differ to a strong mate.  Once in a while this may be beneficial but it is not how God intended things to work.

Our country was founded by people who intended it to be a republic.  A republic recognizes and safeguards the rights of individuals (soloists) against “group think”.  To fully understand this let’s look at some definitions.

Republic: a government in which supreme power

resides in a body of people entitled to vote, is exercised

by elected officers and representatives responsible

to them by governing according to law.

Democracy: a form of government in which the

supreme power resides with the people and is exercised

by them directly.  (Mob rule)

There are some key differences between these two forms

of government.  In a Republic, the supreme power resides

The other key difference is that the elected officers are responsible to those who put them in their positions; In essence, they work for their constituents.  While there will be group think that occurs in a Republic, it should be mitigated by the elected representatives who are ultimately responsible for safeguarding the rights of each individual.

In a Democracy, there are no safeguards for the soloist;  Group think is the sole driving force.    If a large enough segment of the population can gain a majority then the special interests of that majority are the only interests that are promoted.  This does not necessarily have to be a majority of the population either.  They just have to convince enough people that their agenda is good for the whole or that it is “the right thing to do”.

We do not have a republic because our “elected” representatives do not exhibit behavior that would lead one to believe that they work for us.  Nor do they safeguard the rights of the individual.  On the contrary, one might think that they believe we are their servants and that we exist solely to serve them.  Furthermore, I think that our “elected” officials are of the opinion that they are the only ones that have the answers to all the problems that face our country and that we simply should do as we are told.

We do not have a democracy either.  If one is to believe the

pollsters, this country is not going in the direction that the

majority of the people desire.

This is what I think we have today: a sociofascist dictatorship.

Let’s look at some more definitions:

Socialism: any of various theories advocating collective or

government ownership and/or administration of the means of

production and control of the distribution of goods.

Fascism: any program for setting up a centralized autocratic national regime with severely nationalistic policies, exercising regimentation of industry, commerce and finance, rigid censorship, and forcible suppression of opposition.  This may also be characterized by engaging in conflict for the furthering of the goals of the regime and aggrandizement of the military.

Dictatorship: a form of government in which a dictator or small clique has absolute power without effective constitutional limitations.

Notice some key points.  Under socialism we have government administration of goods and/or services (“Obamacare” and bailing out banks “to big to fail”, the TSA and DHS) the list goes on & on.  We have a government that is in total control of the financial sector of this country today.  We have every aspect of the definition of fascism in effect in our country today.  Notice the militarization of our police.  All under the guise of fighting some fabricated specter of “terrorism”.  And we have had a series of dictators that have repeatedly gone outside the law to further their agenda which in reality is the agenda of their handlers.  Not to mention the small clique of 545 people that has supreme authority.  This would be POTUS, Congress, and the Supreme Court.  The very same small clique that thinks that they are above the law and have repeatedly said and shown so; hence, no constitutional limitations.

You see, this whole agenda that has been created to combat this fabricated phony specter of “terrorism” has all been built on lies.

All of this nonsense about fighting “terrorism” has really been about greed; control of the natural resources of other countries.  It is all an illusion to divert the people’s attention away from the real agenda.  The real agenda of all of this is the ultimate destruction of this country and total domination of the whole world by a select few; a select few that are never mentioned by the presstitute media; why is that?  Could it be that the presstitute media is nothing more than a shill for the shadow society that yearns for total world control?  A shadow society that is actually pulling the strings of all of their puppet politicians; a shadow society that despises the independent mindedness of our republic; this is the real ubiquitous “they”.  A  “they” that in reality is a very select few; a select few that are masters of “group think” and manipulation.

Wake up people!  You are being played!  It is time for a real change!  Not some phony double-speak change based on lies with the promise of more lies!  A retrograde change!  Back to what the founders had in mind!  A true Republic!  A nation where true freedom exists and not the illusion of freedom!