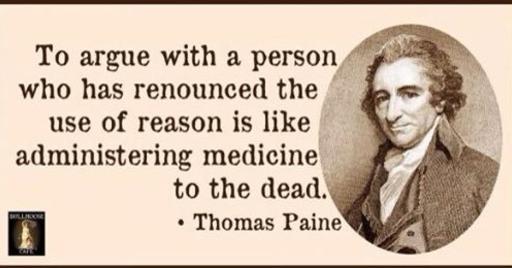 “Those who do not study history are doomed to repeat it.”  -GeorgeSantayana

George Santayana was a Professor Emeritus of history atPrinceton U. & wrote over 40 books on history & economics.

"Never Squat With Your Spurs On" -Will Rogers

"Activism is not a weekend activity, it's an attitude, a way of life undertaken by those intelligent enough to understand that they are under attack. It is the first non-violent response and warning to those who violate our boundaries."  - Connie Siewert

“Molon Labe!” (“Come and take them!”)  Leonidas to Xerxes in response  to Xerxes’ demand that Leonidas and his men lay down their arms at thebattle of Thermopolis.

“No man’s life, liberty, or property are safe while congress is in  session”  -Mark Twain

“One man with courage makes a majority.” -Andrew Jackson (In this author’s opinion) “Ol’Hickory” was the last honest man to serve as  President of the U.S.

"Revolution does little but overturn that which is about to fall." -unknown

"It may interest a few philosophers to know the truth, but the peoples will always prefer dreams" -unknown

“True courage is being scared shitless and still saddling up anyway.”  -John Wayne

“A government big enough to give you all you want, is big enough to take it all away.” -Barry Goldwater (Senator from Arizona and 1964  Presidential candidate)

“Government is not the answer to our problems, government is the problem.”  Ronald Reagan (while I do miss Ronnie and believe he startedout with great intentions, he ended up being a stooge for Bush theElder.  (This quote is from a 1980 campaign speech.  Bush was notRonnie’s first choice for V.P.  He was coerced into taking him as hisV.P.)

“Those who are willing to give up liberty for the illusion of security deserve neither.”  -Ben Franklin

“There are two ways to conquer & enslave a nation; one is by the sword and the other is by debt.” -John Adams 1826

“The only thing necessary for evil to triumph is for good men to do nothing.” -Edmund Burke

“This year will go down in history.  For the first time, a civilized nation has full gun registration.  Our streets will be safer, our police more efficient, and the rest of the world will follow our lead into the future.” - Adolf Hitler 1935

“A lie told often enough will eventually be perceived as the truth.”
-Joseph Goebbels (Adolf Hitler’s #2 man and Minister of Propaganda)

“Political power comes from the barrel of a gun.” -Mao Tse-Tung

“The most powerful man in a country is the one that counts the votes.”

"At no period of history did men so little grasp the present, so greatly ignore the past, and so poorly divine the future."

“There is a sucker born every minute.” -P. T. Barnum

“…most wars are a confession of failure—the failure of diplomacy and negotiation and common sense and, in most cases, of leadership.”  Excerpt from the preface of the book “We are Soldiers Still” by Lt.Gen. Harold G. Moore (ret.) & Joseph L. Galloway

“You can’t cheat an honest man.”  The Flim-flam Man

“What we need is government control, not gun control.”  Tim Siewert

“They crucified the last guy that was perfect.” -Tim Siewert

“There are two types of men in this world: honorable & dishonest.  There is no ambiguity on this. It is the duty of honorable men to keepthe number of dishonest men to a minimum.” -Tim Siewert

“The true measure of success or failure is where you spend eternity.”-Tim Siewert

“90% of the world’s problems are due to a lack of a sense of humor.” – My Uncle Charlie

"If no one ever thought outside the box, we'd still be making fire by rubbing two sticks together" - Connie Siewert

There is no such thing as coincidence.  NCIS rule #39

Be Prepared -the Boy Scout motto

My intent behind sharing these gems of wisdom is that in doing so, everyone who visits my site may get an insight as to where we are and what needs to be addressed.   My editor tells me regularly that I should not be cryptic.   To be any other way would be contradictory to who I am.   I think that forcing people to think is one of my missions in life.   I believe that if people gave more thought to their actions. specifically the ramifications of their actions, we would have less problems.   A good example of this can be illustrated by explaining my “Rule #1”.

I am a retired union carpenter for those who may not know.   I first started working as a carpenter in 1978.   For a good portion of my carpentry career, I did concrete form and scaffold work.   When carpenters build concrete forms and scaffolding it is with the understanding that at some time in the future, the forms and the scaffolding will be dismantled.   Early on in my career I coined “Rule #1” because of what I often encountered when dismantling forms and scaffolding that had been built by others.   Rule #1- Remember one thing, that is:  "when building concrete forms and scaffolding, you too may have to take this screwed up mess apart."   I encountered many situations where more time was spent during the dismantling phase as opposed to the building phase.  Almost always the case was that if a little more thought had been given to the building, then the dismantling would have been much easier and faster.   Also, many more times than not the men that built the screwed up mess were long gone when it came to taking their mess apart.  There have been a few times when working as a scaffold carpenter that I had to build more scaffold to facilitate the dismantling of someone’s screwed up mess safely.  This should never happen on a scaffold job.   That it is why I try to get people to think.  I believe that “Rule #1” can be applied to many more aspects of our lives beyond just concrete and scaffolding.

I would also like to add a few other historical notes.   While Hollywood has portrayed Leonidas as fighting Xerxes with only 300 men, that figure is incorrect.  Actually, closer to 1,100 men stayed from the original force of about 7000 men.   The 300 figure comes from the number of Leonidas’ personal guard that all stayed.   Leonidas gave all of his men the option of leaving when he realized that they were facing a force in excess of 25,000 led by Xerxes.  Leonidas did this with the understanding there would be no ramifications suffered by anyone that chose to leave.   You see, Leonidas’ force was an all volunteer force of what they called citizen-soldiers; basically militia by the standards of colonial America.  Leonidas’ men were not paid soldiers.   On the other hand, Xerxes’ forces were all paid mercenaries.  Considering that Leonidas held the high ground and control of a very narrow pass through which Xerxes had to pass to get to where he wanted,.  I believe that if all of Leonidas’ men had stayed, the outcome of the battle would have been different.   As it was, news of the battle and what happened quickly got back home.   A superior force was quickly amassed and Xerxes was subsequently sent home with his tail between his legs.

The quote from Adolf Hitler is from his “victory” speech after the Nazi Gun Control Act of 1935 had been passed.   This Act was rapidly passed after the false-flag event of the burning of the Reichstag which was blamed on communist sympathizers.   It has never made sense to me how registering guns could have prevented this event or what reasons were used to justify the legislation.   When I was a lad, I lived across the street from a WWII Luftwaffe veteran.  He told my father and I that Hitler told the people what they wanted to hear and then would add other things during his speeches to get the people to accept his ideas.   He had a unique way of making ​convoluted logic seem acceptable.   Another thing about Nazi Germany:  my Uncle Charlie’s late father-in-law was also a German immigrant.  He was a survivor of the Nazi camps.   He was not Jewish.  He was not a Gypsy like myself.   He was not a communist.   He was just a regular pure-bred German, unlike Hitler who was Austrian, who worked as a machinist.   He also had a gun card.   That was the only reason he was sent to the camps.​​​​​