​​​​​​​     I was thinking about a few things.  Talking to friends lately has got me thinking about the past compared to the present.  Someone asked me about the Revolution and the War Between the States.  Seems he wondered how so many were killed with such primitive weapons.  My answer to him was that they were not that primitive and they knew how to use them.  The weapons of the Revolution were primarily flintlocks.  Since the Iron Age began thousands of years ago, man has known that hitting iron against flint created sparks.  This has been a means of starting fires for all those years.  Many today, when in the woods or making survival kits, include flint that can be struck with their knife.  The discovery of gun powder (now called Black Powder) added to the uses.

The standard military arms of that era were smooth bore muskets of rather large caliber by today's standards.  The British standard was .75 inches as were the Committee of Safety muskets used by the Colonists.  Hunting arms along the East Coast were often smaller: around .32 to .40 for small game and .45 to .50 for such as deer and the small Black Bears.  The charge of powder was often very close to the caliber in grains.  The barrels were long to burn the powder.  Side arms, called pistols even then, were usual in the .45 to .60 caliber with a charge of about half the caliber. Some hunting long guns and even some pistols were rifled which added accuracy and range but slowed reloading especially after firing a few shots.  Flint knapping was a trade and the skill was highly prized.  Knapping was the shaping of the flint to required shape and size with a sharp edge.  Knives and even surgical instruments can be made from flint.

Although rain and snow affected the reliability of the flintlocks enough to reduce fighting in the rain and Winter, they were usually backed up by edged weapons such as bayonets, swords, and for the Colonists, tomahawks.  The colonists had learned fighting skills from the French and Indian War.  That gets me thinking again.  My fourth great grandfather was in the colonial militia attached to the British Army in that war after he had a farm, a grist mill, and a large family.  Fitting with the name of this publication, on 19 April 1775, with the call to arms he took all six of his sons to a small wooden bridge at Concord to meet with the best equipped and trained army on the planet.  Another old man thought, "how many of my readers would do that today?"  You know the rest of the story, or should.  If you do not look it up and read it.  You should know it.

As the war heated up, he took his five older sons to join the fighting, leaving the youngest home to take care of the mill, farm, mother and sisters.  As was the custom at the time, Militia elected their NCOs and officers.  He was made a Sgt right away and then a Lt.  When he came back home to check on things a neighbor asked if he knew what his son Obie (my third great grandfather) had been doing.  Seems the boy had a .40 caliber rifled small game long gun.  He had been using it to collect British muskets (nicknamed the Brown Bess) from the Red Coats.  Seems the Brits had a tendency to walk away from the unit to take a crap.  A young fellow sitting in the woods with an accurate small caliber rifle could take a head shot, run over and grab the gear and take off.  Each musket could arm another farmer or tradesman.  There is debate about how many he shot, but the result was that his father decided it would be safer for him to be in the army.  I guess it worked as all seven survived the war.  I would guess the British Army spent a lot of time looking for the sniper.

During the war, most of the Colonials used smooth bore muskets for the same reason the Brits did, faster loading and rapid fire.  Many troops on the colonial side used a load of buck and ball, a bore fitting round ball with three or more large Buckshot, of .35-.45 inches.  Those with rifles who were skilled were put into special units. They learned to aim for the officers and NCOs before the enemy got within  range of their smooth bore, and the soldiers firing the artillery, which was effective at much longer ranges.  The British considered it a war crime to target the offices, as many were of the nobility.  They even executed men caught with rifles in some battles.  That was one reason the people forming the government did not want nobility here.

I would like to believe that all know the war was long, deadly and even who won.  Sadly, I taught adults for many years and I am not sure I can count on that.  Anyway, we sort of won, although the English tried again in 1812, but finally gave up, at least sort of but the Brits had thoughts in 1861 when the Civil War started.  They were a bit upset to have lost so much territory in North America.  The weapons really changed very little between the Revolution and the War of 1812.  Still large calibers with smooth bores; still fllintlocks, long barrels and long bayonets; some American troops were armed with rifled runs, most were not.  The length was at least partly due to the desire for the Infantry soldier to be able to remove a rider from horse.  Cavalry was a great danger to the man on foot.  A strange happening of this war that a major battle was fought after the treaty was signed in the New Orleans area.  Apparently no one had a radio or telephone.  Technology did start moving forward in the early part of the 19th Century.  Heavy industry started to grow, railroads appeared, and firearms started to improve.  How much the firearms improved can be shown by the need to totally change tactics as was proven in the Civil War.  This was to become the bloodiest war in American history.

Between the wars with England and the War Between the States, there was a war with Mexico and some conflicts with the Native American Indians.  Lessons were learned there, but major changes appeared as the things moved toward the big bloody conflict to start in 1861.  Human beings did not get easier to kill but weapons became more efficient.  Still, it is my belief that the weapons that worked in the 18th Century would work just as well today.  Of course improvements in mechanics, standardizing parts, bullet design, and propellents that were on the way would change how things were going to be. That may be meat to be served on another table.  For now this old man has done enough thinking about history for now.  I advise those who learned something new from this reading to do a bit more. Try to find a history book published before 1960, read it.  Do not try to learn truth from network TV.  I will leave you with this thought. We fought the Revolution with .69 to .75 caliber guns, we mostly used .58 calibers in the Civil War, the Indian Wars that followed used .45 caliber rifles, Spanish American War - WW1 - WW2 - Korea used .30 calibers and late Vietnam and today we are using .22 caliber guns.  Give that some thought.​ 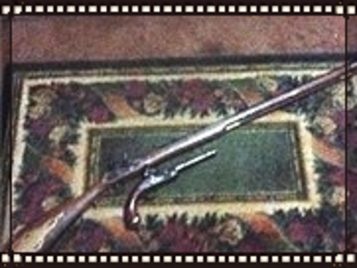